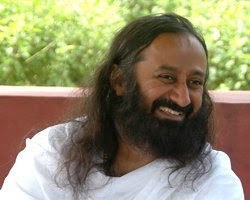 Question : There are many religions in this world and each religion is having a 'definition' of its own for God. But every religion says there is only one God who rules this world. Then who is the 'actual' God? There is no case where a Religion is said to have explained about other religion existing in other part of the world.How do you explain this?

His Holiness Sri Sri Ravi Shankar : I think you have not studied scriptures. If you read Adi Shankara, he talks of what Jainists say, Buddhists say, Purva Paksha etc. Swami Dayanand also speaks of this. This sort of intellectual debate has been there for a long time. Same way, there has also been standoff between religions. All that you have to do is take the essence of the religions, as practically one cannot study all. If you want to see the commonalities, it is up to you. If you want to see the differences, it is up to you
Email ThisBlogThis!Share to TwitterShare to FacebookShare to Pinterest