Significance of Holi – The Festival of Colors 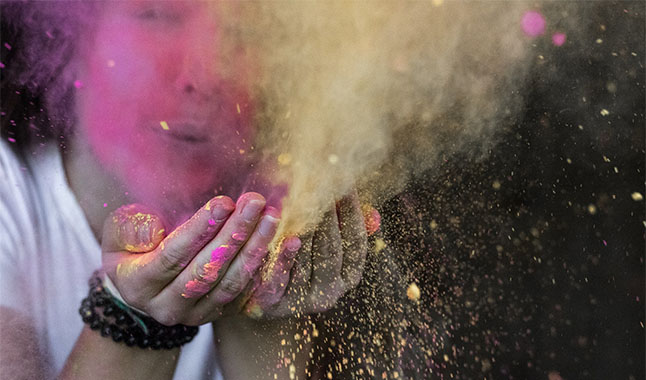 In India, the last full moon of the year (as per the Lunar Calendar) is celebrated as Holi. The next full moon will be the New Year. So before that, the tradition is to just take all the old stuff and put it in the fire and play Holi with colors.
Holi is the festival of colors. From centuries, this is one festival has been uniting people of all classes, castes, age-groups and generations. Everyone comes together and celebrates the oneness of humanity, and that is the message of Holi.
Society divides people, sometimes on the basis of profession, sometimes on the basis of gender, sometimes based on age-group. Holi is a time where we break all the barriers of gender, nationality, race and religion – from the elderly to the young you hug everybody, and put colors on them. It's a unifying celebration.
The Significance of Holi
There are different colors associated with our feelings and emotions. Anger is associated with red, jealousy with green, vibrancy and happiness with yellow, love with pink, vastness with blue, peace with white, sacrifice with saffron, and knowledge with violet. Each person is a fountain of colors which keep changing.
If your life is like Holi, where each color is seen clearly, then that adds charm to your life, it is vibrant. When all the colors get mixed, you end up with black. So also in life, we play different roles. Each role and emotion needs to be clearly defined. Emotional confusion creates problems.
When you are a father, you have to play the part of a father. You can't be a father at the office. When you mix roles in your life, you start making mistakes. Whatever role you play in life, give yourself fully to it.
In ignorance, emotions are a bother, in knowledge, the same emotions add color. Tell yourself that you will do justice to all the roles. You can play all the roles: a good spouse, a good child, a good parent, a good citizen. Assume that you have all these qualities in you. Just let them blossom.

The burning of Holika has an effect on the coming monsoon.
There is story of Prahlada (from where the festival of Holi originated). Prahlada was a young boy who was very devoted to God but his father was an atheist. His father was a very egoistic and cruel king and he wanted to teach his son a lesson because he was hurt that the boy was preaching the name of God.
He tried in all ways to change him but the boy didn't change. When he couldn’t change him, he wanted to kill him. So he approached one of his sisters. She had a boon that whoever she took on her lap, she could do something and the person would get burnt. Her name was Holika. As the story goes, she took Prahlada on her lap to burn him, but instead she got burnt and Prahlada came out safe because he was chanting 'Hari Om’, and was devoted to God, and that protected him from the fire.
In some of the villages, people do fire walking but nothing happens to them, not a blister on their feet! Faith has a great power and it contributes to life. This is the message behind burning of the Holika.
Email ThisBlogThis!Share to TwitterShare to FacebookShare to Pinterest