If any country's citizens needed de-stressing it would be those of Iraq. “
“The (Art of Living) foundation has a history of taking on tough tasks. It has operated similar de-stressing courses in Macedonia, Kosovo, Croatia, Gujarat and in New York after the 11September attacks.”
--BBC World News, January 14, 2004

Keep Reading >>>
No comments:
Email ThisBlogThis!Share to TwitterShare to FacebookShare to Pinterest

The mind that seeks pleasure cannot be centered. When you are centered, all pleasures come to you anyway, but they cannot charm you any longer because you are the source of the charm.The mind that seeks pleasure can never achieve the highest. And if you enjoy drowning in your suffering, you cannot be centered; you are far away from the Path. If you are after pleasure, forget about Satsang. Why are you wasting your time? This is the Art of Leaving. You either seek pleasure or come to me.
1 comment:
Email ThisBlogThis!Share to TwitterShare to FacebookShare to Pinterest

Question: Can we observe joy and sadness, envy and praise, etc. at the same time?
Sri Sri: Emotions are not very clear. Sometimes you are happy with something and unhappy for something else. Sometimes when you change a place, you are happy about moving to the new place but sad for leaving the old place. I've seen even between father and son or husband and wife, conflicting emotions of envy and praise. It's a flow of energy. Energy moves. There's no demarcation.

Question: Does nature always guide us? If I miss the bus on the way to an interview, should I take a cab or look for another job?
Sri Sri: Take a cab to the interview, and if you don't get the job, look for another one!
No comments:
Email ThisBlogThis!Share to TwitterShare to FacebookShare to Pinterest

Do you believe and accept rebirth? 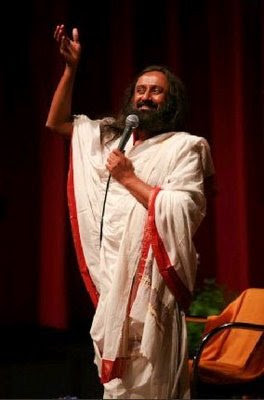 Sri Sri : It is not just me, today it is proved beyond doubt and almost all psychiatrists use regression as a therapy. Past life regression is used all over the world. I think that time has gone when people used to wonder whether it is true or not, whether it is there or not there? For West it is a new discovery, but in the East it has always been there.
Question: While you do believe in this, you do not subscribe to the fact that you do poonya (good deeds) in this life, in the next life, you evolve to a higher caste. That is not connected to the way you see the concept of rebirth?
Sri Sri : No. Rebirth simply depends on the strongest impression on the mind. Even here, in the aashram, there is a boy who is just eight years old and he speaks four languages. He has never gone to school. He is a boy of a farmer. He speaks Sanskrit, Hindi, Oriya and English. He just closes his eyes and he starts talking. He talks deep knowledge and philosophy. I myself had this experience. I know Gita from when I was very young.
No comments:
Email ThisBlogThis!Share to TwitterShare to FacebookShare to Pinterest 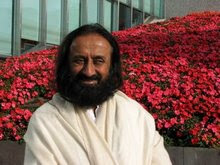 Guru Sri Sri Ravishankar suggested that a blend of knowledge of all traditions, including the teachings of Islam, Christianity, Hinduism and indigenous faiths, to end conflicts.
"Look at Japan where people blended Shintoism and Buddhism so much so that it is now difficult to distinguish between the followers of the two religions."
Pointing to China, he said, Taoism and Buddhism were similarly blended there. "We should also take note of these achievements and try to effect such a blending rising above narrow fundamentalism.
"The teachings of Islam, Christianity, Gita and indigenous faiths, all have wonderful messages for mankind." Replying to a question he said spirituality was different from religion. "Spirituality is like the banana while religion is like its skin." People belonging to all religions could join hands to solve their problems unitedly.
Referring to militants and terrorists he says, "we should talk to those who have been misguided through exposure to wrong beliefs. They should be convinced that all are the children of the same god." Blaming politicians, he said, "politicians won't do anything. Only the spiritual leaders can inspire people."
No comments:
Email ThisBlogThis!Share to TwitterShare to FacebookShare to Pinterest

Terrorism: The Cause And the Remedy 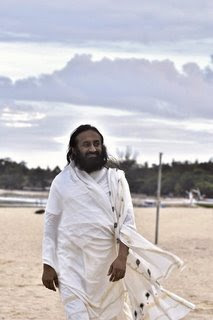 The act which is only destructive and inflicts suffering both on oneself and others is terrorism. In such an act, human values are lost in the process of achieving a goal. Some of the factors that lead to terrorism are:Frustration and desperation to achieve a goal
Confused emotion
Shortsightedness and Impulsive action
Belief in a non-verifiable concept of heaven and merit; a childish concept of God favoring some and angry at others, thereby undermining the omniscience and omnipotence of the Divine.Terrorism induces fear psychosis in all, increases poverty, suffering and loss of life with no apparent gains. Instead of solutions the terrorist looks for destruction as an answer. If you simply criticize without giving a solution, know that this criticism comes from the same seed as terrorism! Although there are certain qualities you can appreciate in a terrorist such as:
Fearlessness
Commitment to a goal
Sacrifice
You will have to learn from them things that you should never do:
Valuing some ideas and concepts more than life.
Having a narrow perspective of life and dishonoring its diversity.
The Remedy for terrorism is:
Inculcate a broader perspective of life -- value life more than race, religion and nationality.
Educate people in human values – friendliness, compassion, cooperation and upliftment.
Teach methods to release stress and tension.
Cultivate confidence in achieving noble aims by peaceful and nonviolent means.
Create spiritual upliftment which can weed out destructive tendencies.
1 comment:
Email ThisBlogThis!Share to TwitterShare to FacebookShare to Pinterest

Prayer within breath is SILENCE
Love within infinity is SILENCE
Wisdom without word is SILENCE
Compassion without aim is SILENCE
Action without doer is SILENCE
Similing with all existence is SILENCE
No comments:
Email ThisBlogThis!Share to TwitterShare to FacebookShare to Pinterest


The Art of Living Foundation is conducting trauma care and counselling sessions, following the recent terror attacks in Mumbai.
For Helpline numbers: +91-9821620948, +91-9967477004
If you’d like to volunteer, call: +91-9820612152
No comments:
Email ThisBlogThis!Share to TwitterShare to FacebookShare to Pinterest

Salvation and a perfect life

Question: How can I be assured of salvation and a perfect life on this planet?
Sri Sri: You need a warranty on the spiritual path also, don't you?
Examine how much time you spend on the spiritual path...Evaluate the seva (service) you are doing...How much are you meditating? There should be a balance between seva and meditation. Those who do a lot of service get burnt out, if they don't make time for meditation, and those, who only meditate, become 'dry', if they don't make time for service. So you need both - service and meditation.
Question: How to pray? I was raised in a non-religious environment.
Sri Sri: Meditation is the best form of prayer. In meditation you surrender, you say let thy will be done. You may light a candle, chant Om Namaha Shivaya.
No comments:
Email ThisBlogThis!Share to TwitterShare to FacebookShare to Pinterest
Newer Posts Older Posts Home
Subscribe to: Posts (Atom)